An unofficial celebration of London's finest stretch of artisanal boozers, by Spank The Monkey and The Belated Birthday Girl. Last updated 26/06/2022. 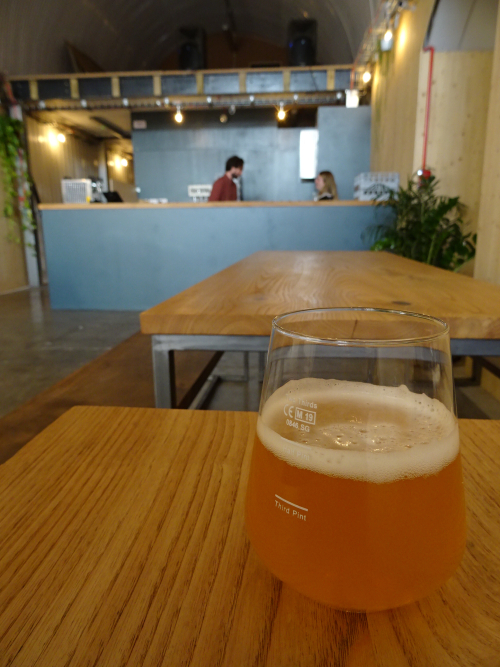 The Kernel was the first brewery to open around these parts (originally on Druid Street, close to where Hawkes is now): all the others came after. Without The Kernel, there wouldn't be a Bermondsey Beer Mile. For years, this was the midpoint of anyone's walk along the Mile, whichever end they started at, which meant that at any given time it was always more crowded than anywhere else. And it seemed like over the years, The Kernel had been doing anything it could to reduce its popularity.

For a while, they did this by closing their doors much earlier than everyone else, at 2pm. It made any serious tour of the Mile that bit more complicated, by introducing a timeframe - if you wanted to visit all the bars, you had to get to all the ones leading up to it well before 2pm. If anything, that made the scrum in its final hour even worse. So, they took things one stage further: they stopped operating as a taproom, only selling bottles for consumption off the premises, and still closing up at 2pm. This led to a period during which The Kernel was almost entirely deserted when you visited it on a Saturday, an alarming dead spot in the middle of a bustling bar crawl. If you dig around this site, you can find a complaint from a reader about how wrong I was to find this disturbing, but they posted that complaint on entirely the wrong page so you don't need to waste your time digging too hard for it.

Besides, since late 2019 it's no longer been a problem. The Kernel are still brewing at Arch 11 of Dockley Road, and for a while still did off sales on Saturdays, though that's no longer the case. But they've now also opened up a dedicated taproom a few doors down at Arch 7, which unlike the brewery has an actual sign announcing its presence. (And that one does do off sales, too.) It's functionally done out in bare wood, with a nice split-level layout, including an upstairs gallery with views out through the arch window itself. There are a dozen or so taps available, including a mixure of their pales, IPAs and saisons as well as their 2.8% table beer: they're served mostly in third and half measures, with some of the weaker ones available as two-thirds and pints. They also serve a small selection of nibbles - beer sticks from Crown & Queue next door, plus olives, crisps and nuts.

Our first visit there was on a Sunday lunchtime - interesting to note that the Maltby Street to Kernel section of the Mile is almost entirely open on Sundays, and less busy than is the case on Saturdays if you're not a fan of crowds. The Kernel bar was a little quiet (it had only been open for a couple of weeks), but still comfortable and inviting - it's the only bar we visited on that mid-December afternoon where you could take your coat off without freezing. The bar staff got themselves into The BBG's good books straight away - the Nelson Sauvin IPA she wanted had just come off the taps, but they rummaged around in the back and found a bottle specially for her. (It should be noted that they don't seem to be selling bottles in this bar under normal circumstances.) It's delightful to see The Kernel finally given the representation it deserves on the Mile - so ignore my previous grumbles and get out there.

Went to The Kernel yesterday (10/11/2019) and can confirm that they now have a new tap room in arch 7 (from memory). Not sure about opening hours yet as it hasn't fully opened yet.

You are absolutely right. Will visit next time I am out there.