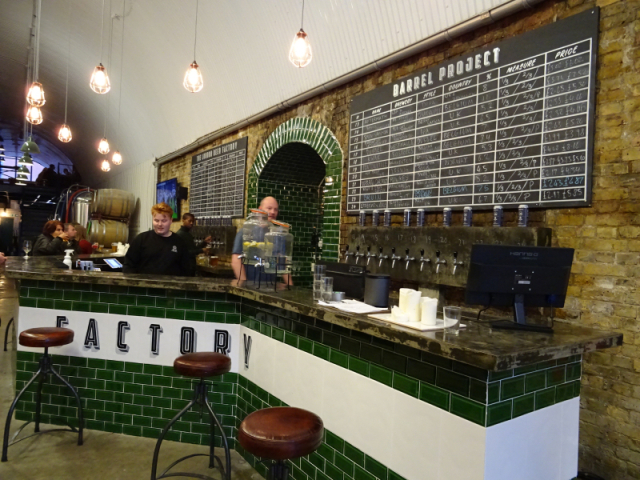 When we did our initial research for the website in July 2018, this place looked like it had potential - the people from the London Beer Factory in Gypsy Hill were about to set up an entire site on the Mile dedicated to experiments with barrel aged beers, which they could then serve to people at the weekends. It took them several months to refurbish the joint, but by the end of 2018 The Barrel Project was fully open, and we're pleased to report that the potential we saw has been fully realised. For one thing, the refurbishment really works: some lovely tilework makes the bar itself positively pop, and the massed barrels along the side wall give some additional atmosphere to what would otherwise be another standard railway arch.

And then there's the beer, all 24 taps of it. How those taps get used has changed a bit over the years: when we first visited in December 2018 there wasn't much barrel-aged beer available, with the implication that this would be something to look forward to in years to come. As of January 2022, those 24 taps had four or five Barrel Project beers (largely experiments in fermentation rather than aging), one cider, and everything else taken from LBF's wide-ranging collection. If you're in the market for some food, the kitchen at the front of the bar seems to be hosting a regularly-changing cycle of popups, with a veggie burger on offer for Veganuary 2022. (They also had a menu of alcohol-free drinks available at the bar for anyone doing Dry January.)

Be advised that on our January 2022 visit, TBP were saying that outdoor drinking was prohibited, suggesting that the council are playing silly buggers with them again.

James (assuming you're both the same James) - Yes, we've checked you out this month and liked what we saw. Post has been updated accordingly.