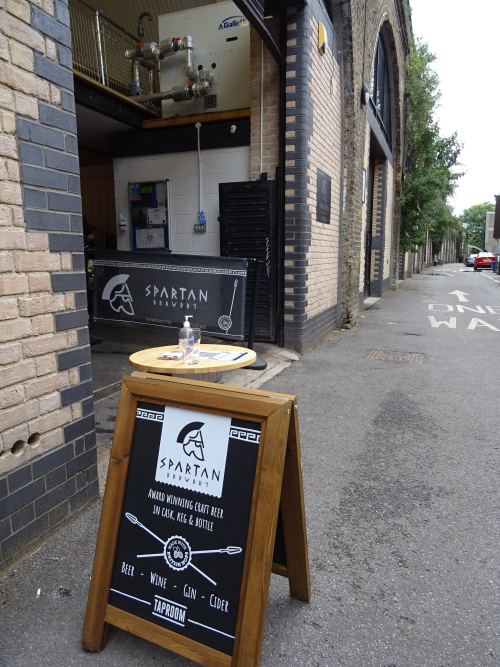 Yes, I know Google Maps says it's 140m from Affinity to Spartan. Their recommended route, bizarrely, is to walk all the way to the end of Almond Road, do a U-turn and walk all the way back, whereupon you'll discover that Spartan is literally in the arch next door to Affinity, and you probably nearly went there by mistake earlier.

When we first did the Mile back in 2014, 8 Almond Road was where the Partizan brewery was located - as you'll see in a little while, they've moved into bigger premises. Is it just coincidence that the arch's new owners, Spartan, have chosen a name that's kinda sorta an anagram of Partizan? No idea, really. There's very little information about them out there - the website I've linked to above is, well, spartan in terms of what it tells you about the brewery's history, other than there are two guys there called Colin and Mike who do absolutely everything.

So all we have is the evidence of what we actually get at 8 Almond Road - the tiniest venue you'll encounter today, a space that's almost entirely taken up by a brewery and a few taps (including a couple on cask and a cider), with seating restricted to the outdoor area they share with Affinity. Spartan do, however, have one feature that will appeal to the beer freshness fetishists amongst you: they have been known to serve their beers directly out of the brew tank. Nobody else on the Mile appears to be doing that at present, so it's worth celebrating. And if you need more food at this point, they seem quite proud of their selection of pickled eggs.