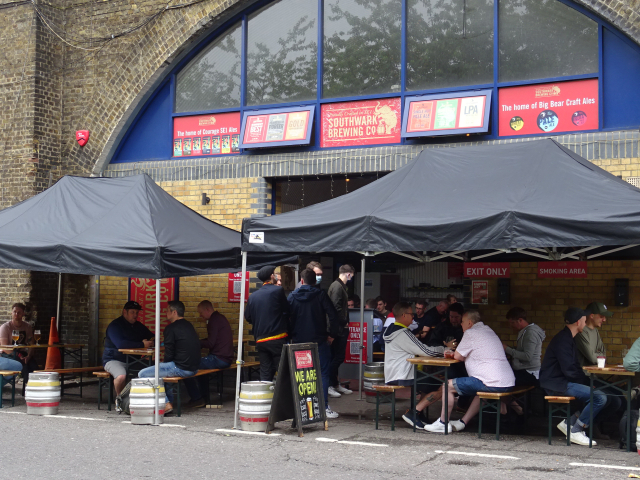 Ignore the ridiculous little bit of Tanner Street that Google Maps sends you up and down, and you'll see that we're doing a simple duck under the railway to commence the first major stretch of the Beer Mile: Druid Street, home to multiple breweries and bars. To be honest, though, Southwark Brewing was always an odd one that never quite fitted in. They were part of the second wave of breweries to open after the initial hype of the Mile, and stood out for their more traditional outlook. In an area full of young hipsters cranking out kegs full of hoppy fizz, Southwark were all about making real ale and serving it from cask. Not that there's anything wrong with that, you understand: The Belated Birthday Girl describes the battle between Real Ale and Craft Beer as being like listening to your parents arguing about their divorce in the room next door. Mummy, daddy, stop fighting!

In fact, Southwark have gone for an ingenious compromise: as well as being the self-proclaimed 'home of Courage SE1 ales', they've now got a separate label called Big Bear which produces beer that comes closer to the definition of craft. So there are eight taps in total, four on cask, four on keg. Best of all, Southwark will give you your first view of one of the best things about the Bermondsey Beer Mile: the chance to see the tanks the beer is brewed in, and drink it from as close to them as possible for maximum freshness. There's plenty of room in this arch to cope with the demand.

Pandemic update: back in December 2018, Southwark Brewing were claiming that you weren't allowed to drink on the pavement outside, by order of the council. As you can see from the photo above, that's not the case any more. Southwark currently has plenty of seating available both indoors and outdoors, with a maximum table size of six.