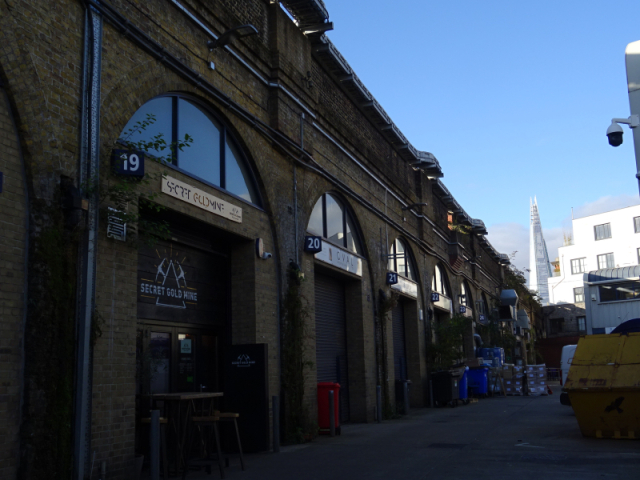 No, it's not an amusingly ironic name for a bar, it's an actual industrial estate. It used to have a bar in it [see uBrew], and it kind of has another one in it now, as you'll see. But the Old Jamaica Business Estate gets a page to itself here because it's located in what feels like the midpoint of the Mile, with the hotspots of Druid and Enid Streets in one direction and Almond Road in the other. And if you don't have something to eat soon, you're probably going to make yourself poorly. So, take a break for some lunch. You've got two options.

Bone Daddies (arches 27-28 in the Estate) is a chain of ramen restaurants, with about half a dozen branches spread across London. The Bermondsey branch, in keeping with the artisanal nature of the Mile, is the chain's research and development kitchen - they play around with new recipes here and use diners as guinea pigs to see how they work. As such, the menus can be a little variable, but you're always guaranteed the usual Japanese bar snacks (edamame, fried chicken, soft shell crab) and multiple varieties of ramen, including vegan variants using mushroom stock rather than the traditional bones. If you absolutely must have another beer, they've got a mixture of craft (eg London Beer Factory) and industrial (eg Asahi) on offer. Though you might be better off with a nice green tea, as you've got a lot of walking coming up.

Secret Goldmine (in arch 19), on the other hand, is more of a cafe, and quite a cosy one at that (it's basically a couple of large communal tables, so be prepared to shuffle and share). Apologies for the vagueness of the opening hours listed above, but their website, Facebook, Twitter, Instagram and Google entries all have different times listed on there. We went there on a Sunday morning in 2019 when they did brunch from 10am, with various options from a full fry-up to avocado toast: The BBG suggests that their hot sauce of choice, St John & Dolly Smith's Old Nick Scotch Bonnet Sauce, will go with it rather nicely. Not sure if they still do that now, but at the very least they have sandwiches and a dedicated pie shop around the back. Plus, as they're Kiwis, their coffee is pretty splendid. All of this made Secret Goldmine a perfect choice for the non-beer interlude of this site, and then they decided that they'd become a taproom for their fellow countrymen Yeastie Boys. So now, as well as the nice food and coffee, they have two taps of Yeastie beer on offer, plus a fridge full of cans covering others in the range. But as with Bone Daddies, if you're doing a full-on Mile Crawl we'd suggest that taking a break from booze at this point will pay off in the long run.