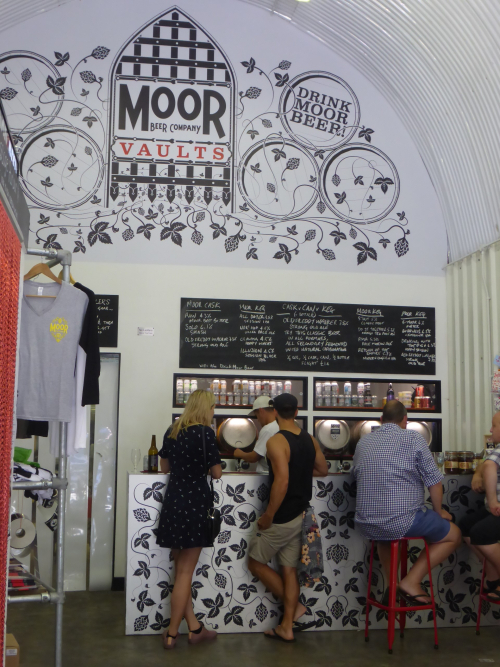 A quick zigzag off Druid Street takes us onto Enid Street and the next major collection of bars. And we're starting with another variation on the brewery-plus-bar formula that served the Mile so well in its early years. Moor Beer - the craft brewery with the most perfect yet obvious advertising tagline you'll ever see, 'Drink Moor Beer' - have a brewery located just outside Bristol (keep your eyes open as the train pulls out of Temple Meads station and you should catch it). They don't brew anything in London. What they do have here is a barrel store: at the back of their arch behind a plastic curtain lies a large collection of beers aging in assorted spirit barrels, waiting to be bottled and guzzled at some point in the future.

So, what can they do with the space in front of the barrel store? Inevitably, set up a bar. The one at Moor is of a decent size in terms of beer - twelve keg lines and three cask lines, the latter advertised as 'not warm, not flat' - but a little limited in terms of seating space, although it's not so bad if you don't mind standing. (In their most recent remodelling, they've now got a seating area upstairs too.)

Since December 2018, the stuff that's been hiding in the backstage barrels has started making its way out to the front of house. We were there for the launch of the first batch from Moor's Bermondsey barrel-aging project - two versions of their Batallas Double Stout (in collaboration with La Quince), one of which had spent a year in whisky barrels, while the other one had spent a year in rum barrels. Both of them had a completely distinctive quality to them, and didn't just taste of old barrel like a lot of these things tend to do.

Bonus points for trying to disguise the single unisex loo as a massage parlour. The pie cart standing outside is also a useful thing.