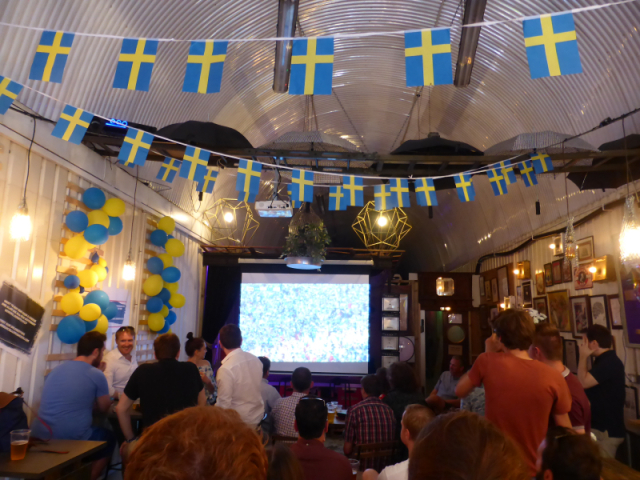 A bit like its neighbour Moor, in that it's not brewing beer on site: but not like its neighbour Moor, in that it isn't owned by a brewery. According to its website's Our Story page (because it's the sort of website that has an Our Story page), it's the brainchild of expat Swede Andreas Fredriksson, who missed the beer and cheese from back home. Unable to find anywhere in London that could provide him with these two basic essentials, he set one up himself.

The beer at London Calling Sweden is from Västra Götaland brewery Poppels: most of the eight taps are dedicated to their various brews, while the rest are guest beers from their Enid Street mates at Brew By Numbers and Moor. (It's rather sweet to see the various businesses on the Mile getting along, rather than competing with each other.) As for the cheese, they used to offer a sharing platter with four strengths of cheese in large quantities, bread, butter, jam and olives: sadly for the veggies among us, these days that's become a Swedish Ploughman's, with added salami.

When we first visited in July 2018, London Calling Sweden had only been open a few weeks, and might have still been a work in progress. That would have explained the toilet arrangements at the time, a single portapotty lurking out the front like a smelly green Tardis. They now at least have indoor loos, which consist of a standard women's bog, a couple of urinals configured for men whose crotches are four feet above ground level, and nowhere for guys to wash their hands. Console yourself with the beautifully distressed bar interior: a collection of random pub furniture and mismatched wall art that makes it look like a pop-up inside an abandoned old boozer, even though the whole thing was presumably constructed from scratch inside the railway arch.

Note that like most of Sweden nowadays, LCS doesn't believe in cash and only takes cards.

Does anyone know if LCS will be open again