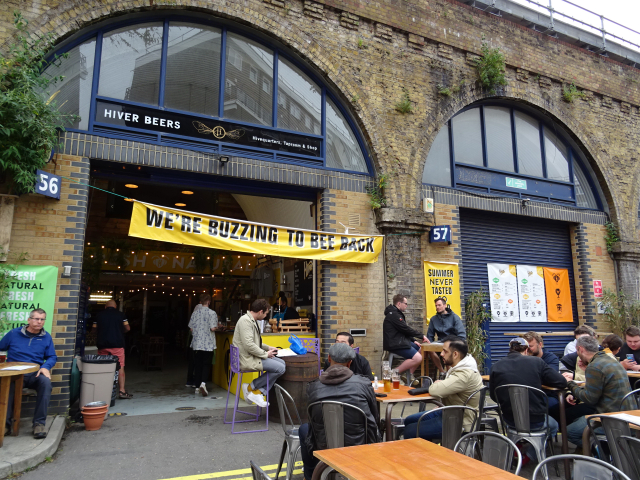 56 Stanworth Street has had an interesting history: at one point in 2018, there used to be three sets of people crammed into this tiny space. It used to be partly the home of All Good Beer, a pop-up bottle shop with a decent range squished into a single fridge, largely British with a healthy smattering of rest-of-the-world alongside. They've now settled into a permanent home in Hackney Downs, and also offer a mail order service from there. It was also simultaneously the headquarters of Bermondsey Street Bees, who keep bees in a rooftop garden and make honey from them: they've mysteriously vanished from Stanworth Street in the way that bees seem to be vanishing all over these days, but their website suggests they're still churning out the sweet stuff on that rooftop.

Which leads us on to Hiver, who - as the name kind of implies depending on how you pronounce it, which is potentially a whole controversy on the level of how you pronounce the title of The IT Crowd - anyway, Hiver make honey beers, not French winters. They've usually got four taps of the stuff available (two cask, two keg), and bottles to take away if you fancy investigating them further. If you end up wanting to find out more about the bees at the end of this, we can personally recommend their Hiver Experiences where you can meet them in person, with a beer tasting thrown in.

For those of you planning to do the full Mile tour, Hiver has one major point in its favour: it's technically part of Maltby Street Market. As discussed in the comments below (because we weren't quite sure at one point if it was official policy), they're happy for you to buy food from one of the market stalls and eat it at one of their tables, ideally washed down with one of their beers. (Assuming you consider having beer with breakfast as an 'ideal'.)

One more thing to note - Hiver is one of a small number of places you'll encounter today who don't take cash, just cards. Plan accordingly.

Pandemic update: Hiver have grabbed a huge amount of outdoor space and have set up plenty of tables for your socially distanced drinking needs. You can book through their website.

IanD - Noted, thank you. We've updated the post to say so.

I went with some friends a couple of months ago and Hiver were still fine with us taking in food from the market.

Hey Guys, We'd love to update you on a few bits in this section if possible?
Yes, people are always welcome to bring in their streetfood to enjoy while at Hiver.
Hiver started on a Maltby street stall so of course, we're keen to do what we can to make sure people enjoy their time in the area. There is a sign saying 'welcome, please bring in your streetfood' but perhaps it was MIA on the day you returned. The team are also super friendly (even though we might be biased!) so please feel free to ask anything, any time.
The reason for the changes in people who share our space is because when HIver started, lots of people (such as the opportunity to be on Maltby street market) helped me get off the ground. And i was keen to be able to offer the same to others, which we've done regularly over the years. Sometime it's the retail space that people need and other times its a hotdesk or somewhere to store their market bits in the week inbetween trading days. So Bermondsey street bees ended up getting their own store on Bermondsey street after a couple of years with us (hurrah!) and the same with AGB... although we miss them it's brilliant news all round as now the space is available for others to get involved and hopefully grow in too.
Hope that's helpful and thanks very much for the update on the homepage re booking a table, really a big help. Cheers!