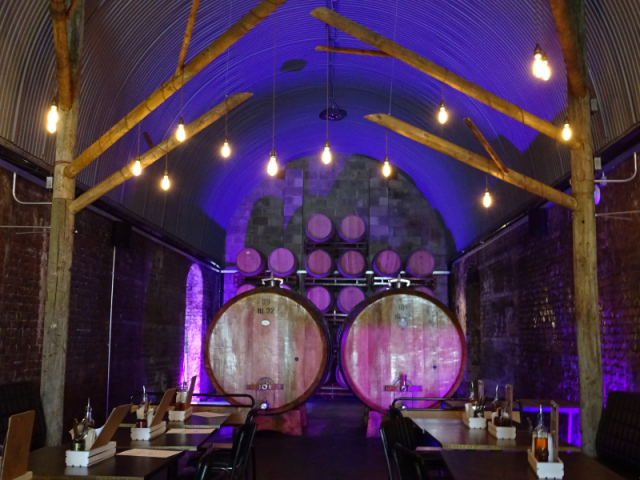 Should we be talking about this on the Beer Mile? After all, there are a couple of oh-so-trendy gin distilleries on the route, and we're not saying anything about those. Well, there are definite links between cider and craft beer, and especially this cider: early in 2018, BrewDog made a substantial investment in - oh, sod it, bought - Hawkes, seeing the purchase as a way of plugging one of the acknowledged gaps in the offerings at their bars.

You can see what attracted BrewDog to Hawkes in particular: there was a similar sort of attitude in the decor, complete with the slogan 'The Cider Revolution Will Not Be Televised' over the bar itself. A year and a bit after the buyout, it's apparent that the money has done Hawkes the world of good: they've revised their tag to be 'Saviours of Cider,' their Urban Orchard cider has become a staple in bars across the country, and they've recently expanded into a four arch stretch on Druid Street.

The refurb works well in some aspects, less so in others. When we did the initial research back in 2018, the upstairs gallery of the bar was boasting 'the biggest TV screen in Bermondsey', which made for a raucous atmosphere during the England/Sweden World Cup quarter-final. That upstairs area has been ripped out now, which makes for a more impressive drinking area - as you can see in the photo above, the barrels provide a terrific centrepiece - but it means that the Mile is now missing a Giant Telly for large-scale sporting events, particularly now that London Calling Sweden has gone. We'd also take issue with the guest beer policy: back in the day, non-cider drinkers could choose from a selection of the cidery's neighbours from other parts of the Mile, but now only one brewery is getting a look in. You can probably guess which one it is. (Though the upside is that our BrewDog shareholder discount cards work in here too.)

But you're probably here for the cider, and Hawkes definitely delivers on that score. There are typically seven or so different varieties on tap, mostly by Hawkes themselves but with the odd guest (including the likes of Tiny Rebel, who I wouldn't normally associate with cider at all). You may even get to see collaborations with breweries like Anspach & Hobday on a graff, a cider/beer genetic hybrid. It actually works surprisingly well. The site overall looks pretty impressive, to the extent that they're now organising guided tours of the premises - on our visit, The Belated Birthday Girl accidentally got caught up in one and got a decent look backstage before realising her mistake.

Of the four arches, the one in the middle is still the bar area, with cidermaking and storage happening in the two to the right, and the kitchen and loos in the one to the left. The kitchen now has an expanded menu with other dishes alongside the regular pizzas: the loos have gone for comedy names, so the gender-neutral cubicle is labelled Adam and Eve, while the urinals just have an enormous sign saying COX. There's also an upstairs area in that arch which was closed off when we visited - they might have had plans for that, but we'll have to go back at some point and see what they've done.

Hawkes are now fashionably cashless, in case you need to know that.

Pandemic update: Hawkes have bookable tables in three categories: indoor, outdoor and Euros (the third one for while the football's still on, presumably on a Non-Giant Telly - note that a couple of other Mile bars have got TVs in for this, too).

Can we buy bottles of cider from 12 .Alan Waters