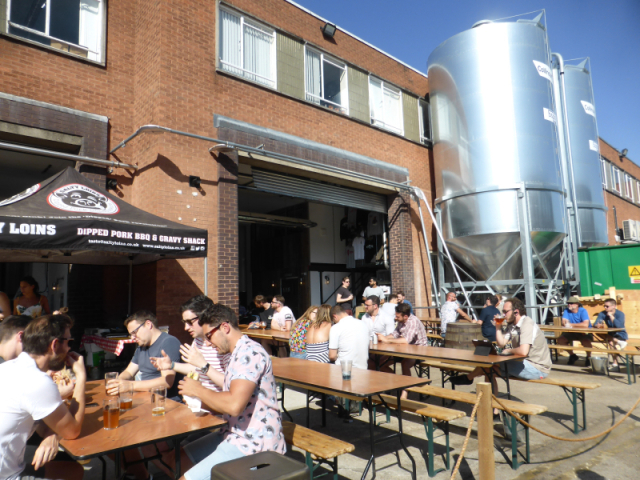 One final walk in the direction of the Trading Estate (look for the Screwfix sign), a couple of minutes picking your way through the warren of small businesses there (watch out for the NO URINATING IN THIS AREA signs), and you'll soon find yourself at the biggest brewery you've seen all day. Enormous tanks outside the building! Two stories of seating space inside! More seating and a barbecue outside! And 20 taps of beer, making this for a while the only brewery on the Mile that needed video screens to keep its tap list up to date! (Craft Beer Junction does that now, too.)

Assuming you started at the Maltby Street end, you've saved the biggest brewery till (almost) last. But making this the last stop on a tour of independent breweries is a bit problematic. Back in the summer of 2018, just a few days before this site went live, Fourpure announced that they'd sold 100% of the company to Australian beer giant Lion, the owners of Castlemaine XXXX. They justified the sale by saying this would give them the money to expand to the degree they'd always dreamed of (and to be fair, the taproom got a fabulous makeover as a result), but it wouldn't have any impact on the beer itself - arguments that sounded fairly hollow when Beavertown had rolled them out a month earlier, following their own buyout by Heineken.

Could we still consider Fourpure to be a craft brewery any more? The Belated Birthday Girl thought not, and went so far as to suggest that as of that point, the Bermondsey Beer Mile should end at Partizan. For my part, I was willing to give them the benefit of the doubt. And that was our view of Fourpure from the launch of this site all the way up to January 2022, when it was suddenly announced that Lion were selling off the brewery, along with the similarly acquired Magic Rock.

So, where does that leave us? Will Fourpure survive? Will they regain their independence, or be devoured by someone else entirely? And what will this do to the beer? If nothing else, it gives us an excuse to revisit the Mile again in the future to see what else changes. We'll let you know.

I agree with Cassius. This is a site about the BBM, Give us the facts and I'll make up my own mind what constitutes 'Craft Beer' and which bars I want to visit/avoid as a result.