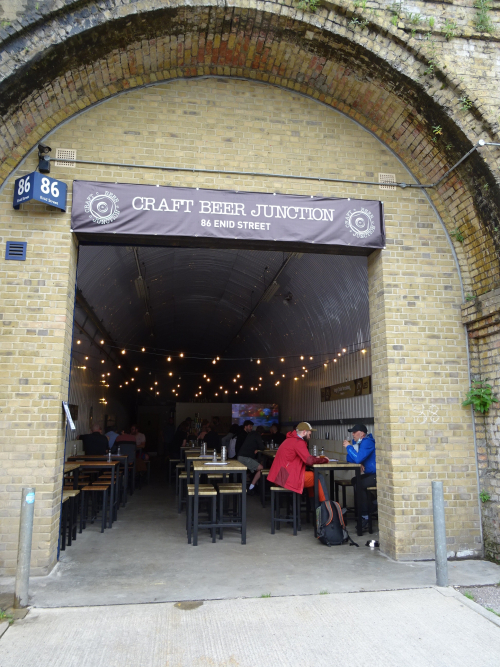 It was so much easier in the old days. There was a collection of small breweries in Bermondsey: they all had bars: they opened those bars every Saturday afternoon to sell the beer they’d brewed. That was the Beer Mile. But then things got a bit more complicated. We have taprooms opening for breweries like Moor and Cloudwater, who are located in places other than Bermondsey. We had (past tense) bottle shops like The Bottle Shop and All Good Beer, gathering the best craft beers from all over the place, with a few of them available on tap too. And we have beer distributors like Eebria, offering a diverse selection on tap with the option of taking a couple of bottles away if you liked them.

Craft Beer Junction is closer to the Eebria model than anything else, and even though it’s not a brewery it’s still a nice addition to Enid Street. Particularly as it’s got a solid idea behind it. On the day we first visited in June 2021, a quick look at the beer list showed that it was largely made up of American beers. A quick chat with the owner (who was working the tables with some diligence) confirmed that it was specifically beers from Tampa, from breweries like Hidden Springs and Escape. Ah, we thought, so it’s London Calling Florida then. But it turns out that was just the plan for June – each month, the beer list will have a different focus. On a subsequent visit in January 2022, it seemed to have settled down into a mixture of American and British beers. The owner was still as helpful as ever, though, so he wasn't just putting it on for the first month of opening.

CBJ is primarily a beer importer and distributor, and with the heavy focus on imports most of the beers are selling in 2/3 measures to keep the prices acceptable. They’ve got ten taps, plus a decent selection of bottles and cans on offer, and inevitably the latter can be picked up from their web shop. They know their stuff – the tap list is packed with detail, and they were sympathetic to The BBG’s request for anything that wasn’t a NEIPA. And if you were there during the Euros, they had an accessible telly right there on the bar. (Post-Euros, the telly's now being used to display the tap list.) No food, or anything that isn’t beer, but the focus on what they do have is appreciated.