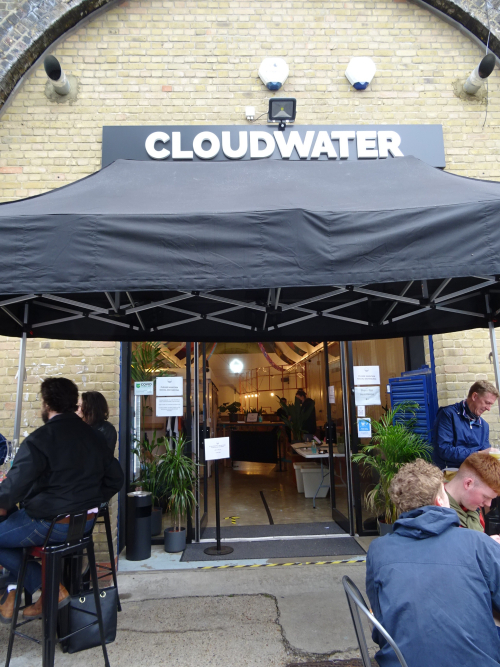 Oh, we'd been waiting for this one. As far back as our initial research trips in July 2018, there were rumours flying around that Manchester's finest brewery - there's a lot of competition, I know, but don't @ me - had their eye on a site on Enid Street. We always suspected that our first major update to this place (as in one that'd require us to plot a couple of extra Google maps) would be the one that covered Cloudwater's taproom. And here it is. Apologies to commenters like Richard on the front page who might have thought we'd missed it - we hadn't, we've just been busy.

At the time of our first visit, there was no actual sign at the front of 73 Enid Street containing the word Cloudwater: the assumption seemed to be that if you can recognise the distinctive cloud logo on a panel on the back wall, you're in the right place. Judging from the crowds inside, people were finding it just fine. (Although by the summer of 2021, they'd cracked and put an enormous sign over the door - see above photo.) Cloudwater's visual identity also extends to a series of large banners featuring artwork from some of their more famous cans, hanging from the arches to give this bar a look unlike anything else on the Mile.

There are twenty taps on offer, though in the early days trying to find out what they were serving was a problem: that minimalist design approach meant there were no tap lists on the walls, just an awkward set of loose paper sheets that you had to retrieve from the bar itself. Amusingly, during the pandemic they found themselves ahead of the curve, as every other bar was forced to use disposable paper tap lists for hygiene reasons. Even more amusingly, on our last visit in January 2022 they'd cracked and got a board on the wall with all the beers listed on it.

The range here seems to tip strongly in favour of the DIPAs and other high strength beers which made the brewery's name. Initially, there was a surprisingly straightforward pricing structure - one standard price for all the beers, with the strongest ones only coming in 1/3 pint measures. But in another example of them starting off with a radical approach and then gradually becoming more conventional,  nowadays the measures and the prices cover a wide range - the former from thirds to pints, the latter depending on how ridiculous the ABV is. (A collection of Cloudwater's canned beers is also available, if you can't find anything on those twenty taps.)

When they rolled into town in 2018, Cloudwater did their preparation to ensure that they fitted into the Mile just fine, while going above and beyond the requirements. The lighting, decor, toilets (labelled as urinals and loos, rather than being explicitly gendered) and atmosphere are all lovely. And it's interesting to see that as of January 2022, they seem to be the one bar on the Mile that's still taking visible pandemic measures, with requests for social distancing and a one-in-one-out policy when it gets full. If you're still a bit nervous about going back to bars, they seem to be understanding that.