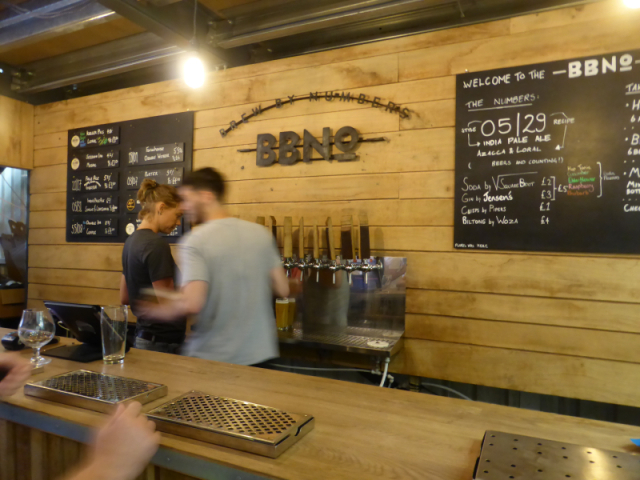 Brew By Numbers: such a fundamental part of the Bermondsey Beer Mile that they're effectively on it twice. Looking down Enid Street from outside Cloudwater, you'll quickly see the hanging BBNo sign that marks their Tasting Room at number 75. It's a nicely constructed room with plenty of space, but it's not the brewery - that's a couple of doors further down at number 79. In the olden days, Saturday afternoon drinks were held at the taproom in the brewery itself, which was notorious for always being packed: inevitably, no matter the weather, you had to drink outside on the street, balancing your glass precariously on the wooden pallets stacked on the pavement.

These days, you can do both: the tasting room at 75 and the taproom at 79 are both open, running eight or so taps apiece, mostly BBNo with the occasional guest beer. The taproom's mostly standing space, but better on next-to-the-brew-tanks atmosphere, and I guess the beer might be fractionally fresher as a result. You will, of course, still have to cope with the usual problem with BBNo's beers: their insistence on giving each of them a serial number rather than a name means that you can never remember what you've actually drunk of theirs from one session to the next. To be fair, it's a lot easier than back in the day, when every beer had a four-digit number you needed to remember: nowadays, it's just a two-digit number indicating the style. Either way, take a notebook with you just to be on the safe side.

Watch out for a large rewrite of the previous paragraph at some point in the future, though, as BBNo are moving their brewing operation to Greenwich (though they're promising they'll still keep a taproom open on the Mile).

Pandemic update: ignore what we said about standing space. Number 75 has indoor and outdoor tables available, while number 79 has just outdoor tables (because inside is the brewery, for the moment at least).