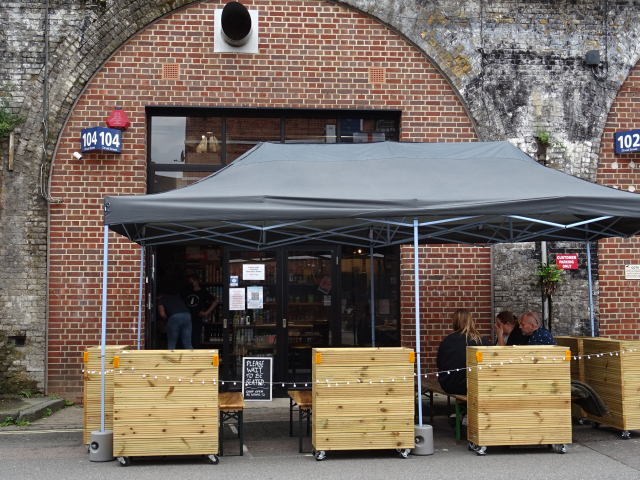 In the early days of the unpleasantness, when a lot of the bars on the Mile couldn't serve anyone, many went for the compromise of offering a take-out service. Which made it a bit of a shame that since the demise of The Bottle Shop and the relocation of All Good Beer, there wasn't really a dedicated craft beer bottle shop here that people could visit. Presumably, that's why there is now.

Billy Franks is an odd one - they're not a brewery, they make beer snacks (so perhaps not that odd really). They've had premises here on Druid Street for a while now, and they've been selling their jerkies in Maltby Street Market as well as various bars across London. What they've done now is convert their premises into a shopfront where they can sell their snacks, and - in an inspired touch - the beer to go with them.

There's a decent selection of craft beers on display in their fridges, featuring all the usual suspects along with a couple of ones even we hadn't heard of before. The staff are friendly towards anyone who pops their head through the door, and are happy to chat about favourite beers and give recommendations. There are a couple of tables outside if you want to try out your cans once you've bought them: and at some point in the future, they're hoping to add a couple of taps and convert the place into a full-blown bar. It's one worth keeping an eye on, we think.

(And yes, they still make jerky. The vegan version is surprisingly impressive.)

Pandemic update: those outside tables can be booked if you know in advance you'll want a sit down.