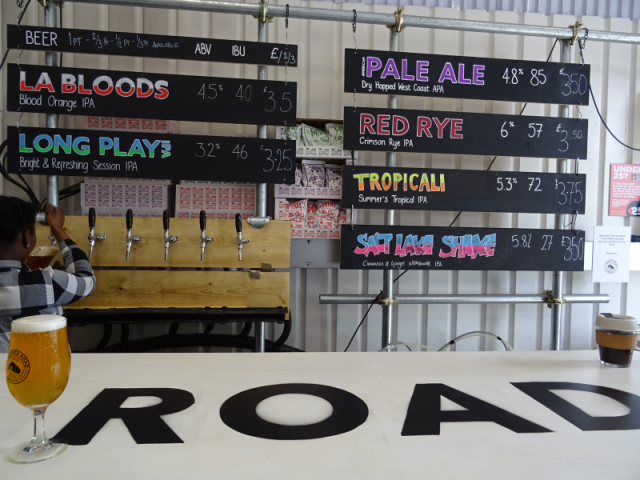 We'd been running this site for about a year when something freaky happened for the first time: a brewery got in touch with us to ask if we could write about them. I mean, how could we say no? Cloudwater never did that.

Bianca Road, you'll have noticed by now, isn't located in Bianca Road at all: though they used to be, as they're a Peckham brewery that moved into one of the key stretches of the Bermondsey Beer Mile, spreading themselves over two adjacent railway arches on Enid Street. You can sit in either one of the arches: one of them contains the bar and the brew tanks, the other one contains the keg storage area and the toilets, so choose wisely. Either way, you'll find yourself in an agreeably airy open space, with decor consisting of lots of wood and an alarming amount of cycling memorabilia.

Is it tacky to suggest that Bianca Road's managed to recreate a Peckham bar's vibe in the middle of Bermondsey? For a start, it's the first bar we've encountered along the Mile staffed largely by people of colour, all having a ridiculously good time in their jobs - on the afternoon we visit, they're grooving along to Sylvester's Do You Wanna Funk, but not so much that they stop paying attention to customers who need beer. The beers they brew on the premises have quite a bit of cheeky wit to them: like their blood orange IPA called LA Bloods, or a cinnamon and ginger milkshake IPA titled Lake Shake. You could easily settle in here for an extended run through their half a dozen or so taps, which makes it a good thing that a friendly street food van is parked conveniently outside (only on Sundays, though).

Like I said, when this bar opened in 2019 we'd been running this site for a year. Bianca Road and Cloudwater were the two main new bars to have opened in that time, and to us they felt like the Bermondsey Beer Mile's next generation: picking up the things that made the original bars so successful, but doing them with a lighter touch and a greater degree of style (or funk, if you must). We haven't been in there properly for a little while, but whenever we've passed it it seems to be doing well, so we should remedy that in a future update.