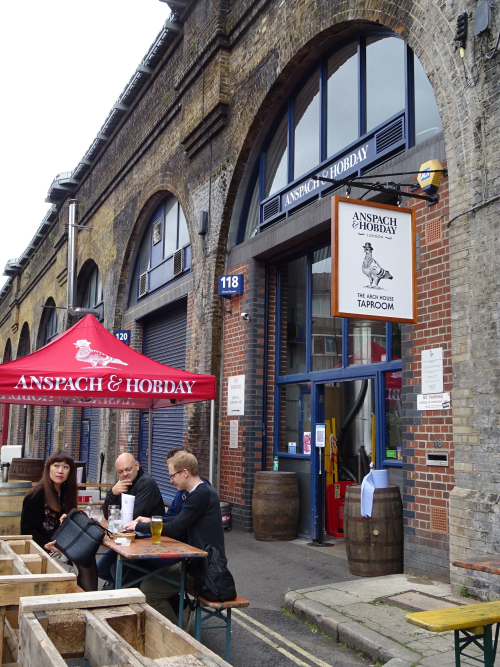 When we first did the Mile back in 2014, Anspach & Hobday was either the starting point or the end point of your pilgrimage - for us, it was the start, and set us up nicely for what to expect. Years later, it's still there, although it's acquired a few more neighbours in the interim, and there have been other changes too. Back in 2014, A&H shared this space with a second brewery called Bullfinch: the latter has now moved out to their own premises in Proper Sarf Landan, but they still turn up as a guest beer here now and again.

Anspach & Hobday now have 118 Druid Street to themselves, and initially took the opportunity to fill up even more of the space with beer tanks - a hefty quantity of the seating that was there a few years ago has now gone, with just some benches backing onto the brewery itself and a few tables on the other side of the room. But the beer arrangements are still the same - eight or so taps of A&H beer, with the odd collaboration or guest added to the mix as appropriate. (They're also offering wine and gin, if you've somehow found yourself doing the Beer Mile but can't stand drinking beer.)

More recently, the arch next door has been rebranded as The Grain Store (where they carry out weird fermenty experiments), while the main taproom is now known as The Arch House, with the brewery itself now relocated to Croydon. The limited seating space keeps the whole place busy and buzzy, which may explain why it's the first one on the Mile that has security on the door. No sign of any trouble, though.

Pandemic update: The Arch House has a few tables both inside and out, all of which are bookable. The security guy on the door has a lot more work to do as a result, but he was utterly delightful on the day we visited.

Excellent blog. I loved it. Thanks.