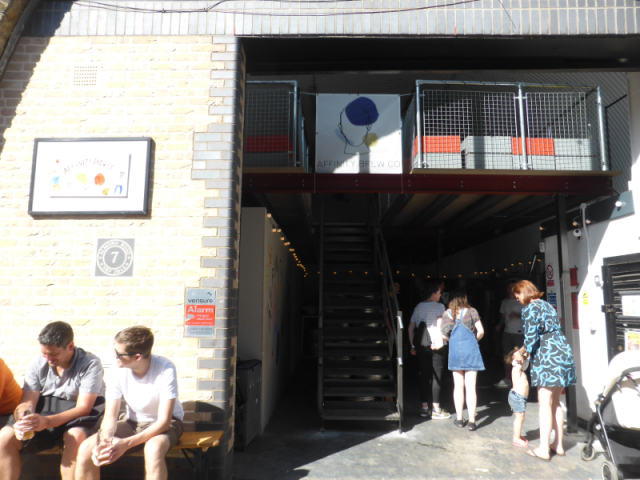 One whole kilometre from The Kernel to here! Why, it's almost as if this bar crawl is really two separate bar crawls with a huge hike joining the two. Anyway, that was the longest bit of walking you'll need to do, as Almond Road has a few stops mere yards from each other, and all the rest after that aren't too far away.

To start with, there's Affinity, a tiny brewery that's made surprisingly efficient use of its arch space: there's a bar with five taps, visible brew tank action, and an upstairs seating area. (There are also a few benches outside for when the weather's nice.) Affinity is, at the time of writing, the only brewery on the Mile that's put the same thought into its taproom design that most other breweries put into their package design: there's clever use of cartoony artwork that really brightens the place up, and is even more effective now they've started making cans to plaster it over.

If all that walking to get here has given you an appetite, someone's obligingly set up a small burger and hot dog stall in Arch 6 next door.

Had a lovely time visiting a few of these bars yesterday, but just to mention Affinity was actually closed on a Sunday (though google maps told us Kernel would be closed and it wasn't!) Thanks for the guide.

These guys have now moved - they sold the unit to these chaps who are putting their license together:
https://www.threehillsbrewing.com/